'What are those television-typewriters, anyway?', asks the cover of The Personal Computer Book. I plucked this off the shelves of my local Goodwill a few weeks ago and finally got around to cracking it open. If you want a copy for yourself, you can find it and its sequel easily on the internet. It's entertaining, both in the author's writing and illustrations and how dated and/or accurate it is. It's informative, with many historical tidbits on computing I'd never learned before and a perspective on owning and operating a personal computer I never got to experience. I'm going to comment/summarize/ramble on some of my favorite quotes, images, etc. according to each part of the book, starting with Part 1 - All About Personal Computers.

Before I get ahead of myself, some context from the Introduction. The author's very first sentence:

This is a book for people who know little or nothing about computers, personal or otherwise. (p. 13)

I might be tempted to think, "welp this doesn't apply to me"... but actually, this is perfect! As someone who grew up never knowing what life was like without computers, this is going to provide me insight into how people were first introduced to personal computers. The author also says:

And that he is - sincere, not serious. Sincere about introducing the reader to the foreign concept of a personal computer for the first time, but not in a serious, condescending way; rather, in a lighthearted and fun way 😄 .

However, he says the following sincerely, and anyone who reads this excerpt post-2015 must think, "Surely you can't be serious.":

In other areas, personal computers will prove so unnecessary as to be considered a nuisance -- reading the daily newspaper, scheduling appointments, filing personal income taxes, locking the doors at night, or turning the coffee on in the morning. (p. 14)

Can't blame the author here, but he is mostly wrong. Can you imagine if, in 2022, we still called a restaurant to place an order for takeout? No TurboTax Free filing system online? We still relied on some teenager on a bicycle to throw a newspaper at our front door every morning to get information? As for locking the doors at night and turning coffee on in the morning, sure, the author is right (to me), but those are a bit less commonplace or at least to me less necessary than the afforementioned use cases.

This is what I mean to say:

I totally get telling Siri or Alexa, "Lock the front door" or "Turn on the kitchen lights". That's just not for me - to me, doing that is a nuisance. Same goes for coffee. Nespresso and Keurig are cool and all, but I can't live without handgrinding some fresh coffee every morning. Ok, my being somewhat of a luddite in these areas aside, the author is completely wrong 😆 .

Part 1 - All About Personal Computers

Chapter 1 isn't all that exciting. The author introduces the microprocessor, CPU, ROM (yes, ROM), and RAM. What's worth noting are the myriad persistent data storage options consumers had at the time. They had to choose from cartridges (like 8-track tapes) and magnetic media (tapes or disks) which could come in the form of floppy disks, minidisks, and diskettes. Not as easy as just picking HDD or SSD. 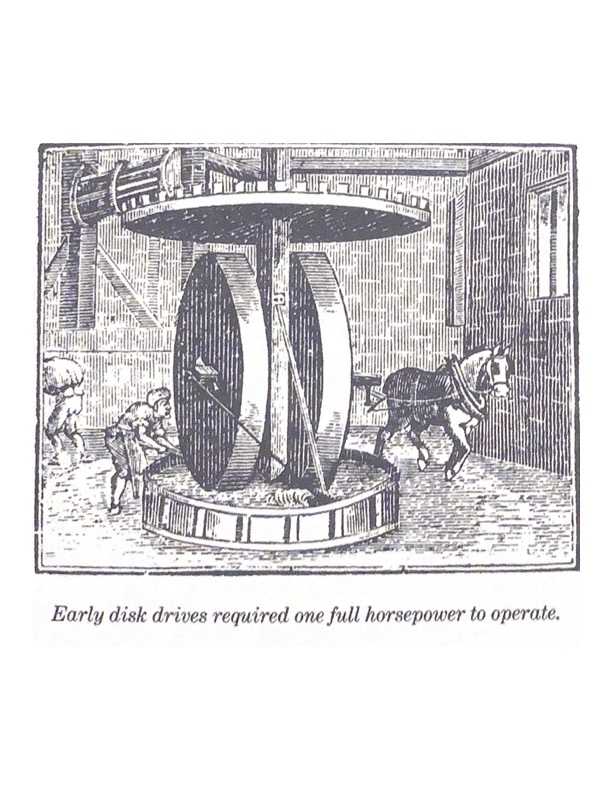 The author goes on to talk joysticks, keyboards, video output, printers, and modems. Believe it or not (this is more for anyone born after 1995), you used to be able to communicate with other computers - before the Internet! While I can claim I knew that before reading this book, TIL what the root of the word modem is:

A modem takes information from the computer, modulates it, and sends it over the phone line. A second modem at the other end demodulates the signal back into a form the receiving computer can understand. "Mo-dem", then, describes what a modem does - modulate/demodulate. (p. 32)

Boy, I sure wish I had Mr. Wizard to help me with this chapter.

Uh... who tf is Mr. Wizard? Ooh, cool it's a show that taught the science behind ordinary things. Add that to the backlog.

This is my favorite quote thus far:

This chapter is optional. You will never need to know how computers work. All you need to know is that they work. (They do.) (p. 36)

Hell, I'd be lying if I claimed to know how computers work. I can probably claim to know more than the average person but still, I don't know much as you go further and further down the rabbit hole. I like to work with computers and on computers and software, but the physics behind the magic rocks contained in all the electronics surrounding me as I type this? No way.

The hows and the history of most machinery is intimately connected. (p. 37)

I find this profoundly true! Lots of things in tech can be explained as vestiges of the past or blamed on decisions made decades ago. But of course, computing - the good, the bad, and the ugly has been essential in improving the human experience. Just because things work the way they do for historical reasons or decades old decisions doesn't necessarily mean that's a bad thing.

Most of the remainder of the chapter is on the informal history of computation, from abacus to 1982 personal computer, which I find interesting but not interesting enough to regurgitate here.

Chapter 3 - Of Programs and Programming

This chapter mainly focused on what you can do with a computer. The main things - word processing, accounting automation (aka early days Excel), playing games, etc. What I found interesting was the confusion at the onset between running programs and writing programs:

There is a misconception in the land. The misconception says that, in order to program your computer, you must learn something special, like programming. You don't. To program a computer, all you need to do is put a disk in a disk drive, or put a cassette in a cassette player, and push a button. That's it. (p. 55)

These days I think we would use the word "install" in favor of program, but in those days you really did have to "plug" your programs in. Given that the author intends to demystify computers and make them more palatable and less intimidating for the novice user, I think it's appropriate to say that anyone can program a computer. (That is true to this day still - anyone can program 😄 )

And one of my favorite takes about programming, one that I've always had and I'm glad this was brought up in 1982:

Ain't that just the truth.

😆 Really funny to read this and think, "Do people actually think programmers are masochists?" But then you have to realize, back in the day programs were shared primarily via print. Meaning, to use someone else's program, you had to painstakingly copy a program byte-by-byte from what you see in a magazine to your own machine. One byte wrong, no dice!

the majority of what you run on your computer will have been written by others (p. 58)

I'd never had any insight into how computer users back in the day used their telephones to access data banks of information, so this chapter was really eye opening. The author gives a firsthand account of his experience accessing CompuServe, The Source, and The Dow Jones Information Service. You can access these by dialing a phone number. Accessing information like weather in Tokyo, stock market prices, etc. was done not via PC but mainframe - true today too:

No one stores that stuff locally these days. (do they?)

I immediately am drawn to the analogy commonly used to explain DNS in 8 words: "It's like a phone book for the Internet." So 40 years ago, you had to use an actual phonebook to access their equivalent of the Internet (data banks), and today, we use domain names and DNS (phonebook) to access the Internet!

Last thing of note, this man really published a password of his! 🤦 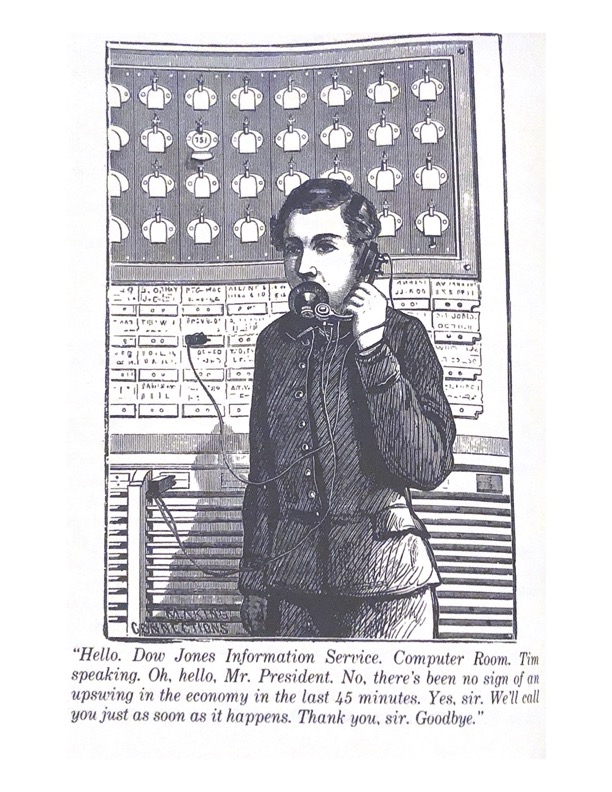 Fig Caption: "Hello. Dow Jones Information Service. Computer Room. Tim speaking. Oh, hello, Mr. President. No, there's been no sign of an upswing in the economy in the last 45 minutes. Yes, sir. We'll call you just as soon as it happens. Thank you, sir. Goodbye." (p. 72)

Part 1 of The Personal Computer Book (1982) was entertaining - looking forward to Part 2 and making a writeup about it 😄 .